As you know, we have been keeping things under pretty tight wraps for some time now. There is a reason for that.

As we progressed in development and had a first wave group of private testers playing the game regularly, we realized that while the testers liked it and were having fun, it just didn't feel quite how we wanted it to. It was fun... but it wasn't... FUN! It didn't have that small bit of "wow" feel to it. You know, that aspect that makes you think about it during the day while you are at work and keeps you looking at the clock to know how long it will be until you can go home and play again. So we took it all back to the drawing board!

Through intense scrutiny and tester feedback, we identified several areas that needed to be reworked if we were going to get over that "wow" hump. And we have kept things pretty quiet as we put the plans to change those areas into action. We’ve got a lot of updates to share, so we’ll be splitting it up into several different blogs.

The first change we made was to take the fights off the main island and into smaller, more focused arenas. It was just too big and sprawling to create the kind of intense, adrenaline-pumping engagements that players thrive on. Our new design model for arenas consisted of two primary points:

The new arenas are much smaller than the primary mining colony island of Insula, but with all of the newly redesigned vertical play space, they feel just as big!

Stay tuned for our next blog, which will cover our fully redesigned flight system, aerial combat, and updated energy reserves. Until then, make sure to follow us on our social media channels @playinsula for more updates. 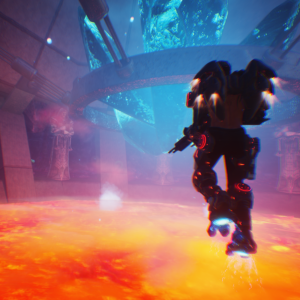