Hey everyone! In our last blog, we covered the changes to the design philosophy for our combat arenas. If you missed it, make sure to check it out here.
The second part of the plan was to fully redesign the flight system from the ground up, update our energy reserves & focus on our in-game combat.

We really focused a lot on the new true vertical play space; we needed a flight system that took full advantage of it. The old boost/hover style flight worked exceptionally well for aerial combat, but we wanted more. We wanted fast-paced, highly mobile, acrobatic aerial maneuvering! We had shock troops on the ground; we had hovering gunships in the air, we wanted full-on acrobatic dog fights as well!

Since our original boost/hover style of flight worked so well, we kept it. The new flight system has multiple flight modes! You can still hover and move around while blasting your opponents just as you could before, but now you can kick it into full flight mode and be MOBILE! Full flight mode is fast, it is incredibly mobile, and above all else, it is agile and acrobatic. 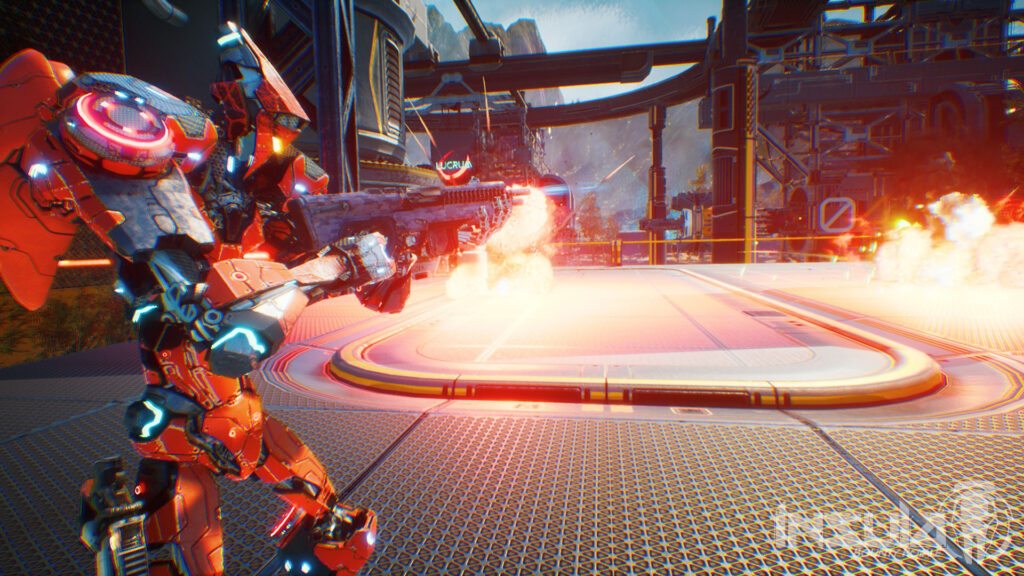 Energy Reserves Updated
A revamped flight system with multiple flight modes demanded a revamp for the energy system, and it was used. Flight still burns energy; you cannot fly forever. However, we slowed down the rate at which it burns to allow more extended, more satisfying flight times. We also made the hover mode so that it no longer consumes energy. It is not, however, free of impact on your energy system. Full flight mode will burn through your energy reserves, and it takes time to build that energy back up. While hovering will no longer burn energy, it now slows down the rate at which your energy reserves are recharged. So if you've burned up your energy and are looking to get back into the air as quickly as possible, you'll want to take to the ground for a while, as there, your energy will recharge at its fastest rate.

Ranged Combat:
In general, weapons and combat have also gotten a major overhaul to fuse well with the new flight modes and aerial combat. Ranged weaponry has added weapon types that use EMP based technology on delivery. This will play havoc on a player's flight systems. You can fully disable a player's flight system mid-flight and cause them to plummet to the ground if your reactions are quick and your aim is true.

Melee Combat:
Melee combat has been overhauled in multiple ways. The combo system has been improved; the attacks have had their speeds and timings revamped to adhere to a faster gameplay model. The process of switching between ranged and melee has been greatly simplified and sped up to feel more fluid and seamless for the player. Power attacks have been improved so that they are easier to plan and execute. Lastly, positional attacks have been added that allow for special attack types to be triggered based solely on what you were doing as you launched the attack (i.e., sprinting, evading, jumping, etc.).

Automated Security:
Our arenas are facilities owned and operated by Lucrum, many of the pre-existing automated security systems are still in place. Some of these have been brought back online to provide an additional threat to our combatants. These currently range from automated machine gun turrets at high-value locations, to homing EMP based missile turrets protecting the skies. Be mindful of your surroundings and pray for quick reflexes as threats are everywhere!

We hope you’re enjoying the latest updates so far. We still have a lot more to come! The next blog post will be focused on our human characters and the exosuits we’ve added. Make sure to keep an eye on our website or social media channels for the next blog post. Until then, we’ll be busy in our dev cave.

It works similarly to a fighter jet. When you engage in full flight mode, your thrusters kick in full bore, and you are constantly propelled forward. You have full steering control while in this mode, as well as some very nice acrobatic maneuvers you can pull off. The first of these maneuvers we implemented was the barrel roll. While being a very nice addition on its own for simply evading enemy fire, our flight model allows you to use this creatively to different effects. Simple barrel rolls can get you out of the line of fire fast, or let you suddenly veer off-course in an attempt to lose pursuers, but it's not just a reactionary ability.

If you combine a fast turn with an inside barrel roll, you can perform hairpin style turns mid-flight. Turn the tables on your pursuer or even say... evade a pesky homing projectile. Combine that same turn with an outside barrel roll, and you will perform a wide arcing, almost drift like turn. This is highly effective when using the environment to your advantage. You can zip behind a large pillar or rock formation and come "sliding" out of the other side in a position to turn your pursuer into the pursued!

More aerial capability is being added, and you can be sure that they will all be as intuitive to perform, and tactically effective as the barrel roll. 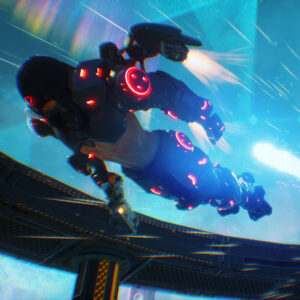